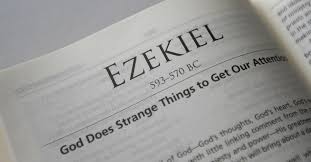 Today’s Watchword comes from the desk of the Prophet Ezekiel. God’s people had once again found themselves in a position of unfaithfulness to their Lord and King. The term ‘Adonai’ means Lord and Master and the children of Israel were serving many false gods, worshipping only their own needs, desires, and the works of their own hands. They had also taken in the pagan ways of worship and the idolatries of the surrounding nations. Something else had become Lord and Master. Defiling God’s holiness with ‘detestable things’ and defiling themselves. Does anybody hear me?

Knowing that (ancient) Israel represents a microcosm of the fallen spiritual state and human condition of all men, everywhere, we can clearly see that Ezekiel’s account and forecast to Israel could be a spiritual broadcast and moral indictment on today’s Believing world. One that is upon us this very day. We see that the very nature of God’s people remains unregenerate without godly submission and obedience to their king – and that the (unrepentant) sins of His people are always met in the end with the most dire consequences and His divine judgement. What can we do to ‘Save ourselves so that we may live’??

God wanted the prophet Ezekiel to let the people know that every man, woman, boy and girl will stand on their own testimony and righteousness before God. That no one will inherit the sins ‘or the righteousness’ of the other. And while it’s true that we suffer collectively for the punishment and judgements that are brought upon the land due to the sins of our spiritual and national leaders, each one of us will only be held to account for what we did with our own soul and life before God. This is His very Word for us to HEAR today!

His ancient people, like many of us today, had many customs, folklore, and ‘proverbs and sayings’ that just didn’t line up with God’s heart and Word for His people. God is still sending His prophets and servants to speak clarity and life to His people today.